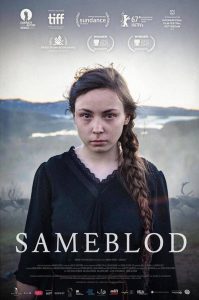 “Sami Blood” tells the story of the Lappish girl Elle-Marja’s assimilation to life in Sweden at a boarding school where she went to get integrated into Sweden and Swedish culture. This movie is an end and an apology for the racist attitude of the Swedish people. The main character, Elle-Marja, is the daughter of a Sami reindeer family and goes to a boarding school with her sister to learn Swedish and Swedish culture. Elle-Marja speaks Swedish well and is assigned to host Swedish dignitaries at her school. As a result, a period of emulation of Swedish life begins. She flirts with a young Swedish man but is forced to return to her own Sami life. Elle-Marja wants to study in Sweden but because her financial means do not allow it, she returns to the family and asks for money. She gets the money she wants, albeit with difficulty, and builds a new life for herself in Sweden.

The biggest reason why the movie resonated so much is that it was presented as an apology for racism in Sweden. At the same time, in my opinion, the fact that this film, which reveals Swedish culture, features Scandinavian actors increases the sense of reality in the film and helps convey the desired emotion better. I must not be alone in my opinion because the lead actress, Norwegian Southern Sámi actress Lene Cecilia Sparrok, won the Guldbagge Award for Best Actress in a Leading Role.

The plot and flow of the movie were very realistic and portrayed quite well a young girl struggling with racism. One of the scenes that impressed me the most was that Elle-Marja was very successful in boarding school and when she told her teacher that she wanted to go to Uppsala to get a better education, her teacher tried to dissuade her from this idea by telling her that the students in Sweden received much higher education. Elle-Marja did not accept this mistake and went to study in Uppsala against all odds. The fact that they created a young girl as such a brave character who lives in the countryside and wants to end the discrimination she sees by immigrating to the city is an indication that their apology is sincere. On one hand, the poverty of Elle-Marja’s family and their disconnection from modern life appear as a dramatic reflection of the Lappish culture. The biggest reason why this is dramatic is the gradual disappearance of the Lapps and their culture and the efforts of these people to maintain their existence. Before Elle-Marja returns home from the school holidays, she speaks Swedish to her mother and her mother scolds her, saying “Don’t speak Swedish.” This scene is the shortest but most meaningful example of this conflict. On the other hand, the fact that the subject of love, which is covered in many films, is incorporated into this film, albeit just a little, brings some colour to the subject that the film wants to tell. Elle-Marja has a one-sided love affair due to racism and cultural differences. These scenes are actually very few but very meaningful scenes. In my opinion, dealing with this subject with such few scenes does not detract from the aim of the film and gets plus points from me.

The only downside to the movie is the beginning. These scenes, which talk about the old age of Elle-Marja, are not very compatible with the flow of the movie and may seem too meaningless at first glance.

Considering the movie as a whole, this movie is definitely a must-see for everyone. Explaining the practices that are crimes against humanity with all their nakedness gives a lesson that all humanity should learn very well. In this movie, we see that racism is not just discrimination; it affects people socially, economically, and culturally, and creates inequality of opportunity. At the same time, it is a movie that anyone who is curious about Sweden, which is a relatively less mentioned geography within the EU, will enjoy watching but will be saddened as well.