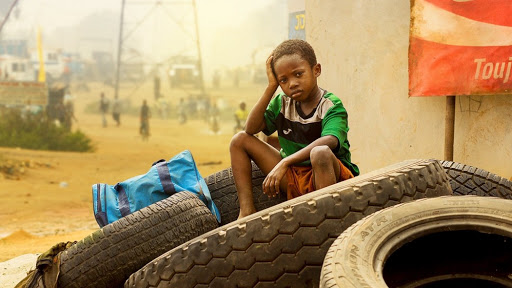 Spanish director Salvador Calvo’s 2020 drama movie “Adú” revolves around three connected stories, all of which shed light on migration from Africa to Europe. The main story is shaped around Adú, a Cameroonian little boy who tries to escape with his elder sister from the gang of ivory poachers. Two other stories, which are of a wildlife activist and a civil guard in Melilla, indirectly affects Adú’s journey on his way to Spain, where he hopes to meet his father. The movie does not have a specific genre, it is neither a biography nor a documentary. However, its scenario is based on events that a child refugee might have to cope with for real.

The movie starts by a scene that depicts the struggle of asylum seekers and refugees at the borders. On the border of Melilla, which is a Spanish autonomous city bordered by Morocco on the northwest coast of Africa, while a group of refugees and asylum seekers try to cross the border, one of them gets caught to the fence. Afterwards, we find out that his name was Tatou and he was a political prisoner in Congo. As an internally displaced person (or IDP, in short), what drove Tatou to the borders was to oppose or criticize the government. So, instead of being imprisoned, he sought for a better living in a different country as a refugee. Unfortunately, on his way to a safer future, he dies at the border right after one of the civil guards hits him with his baton. In the movie, we witness the self-confrontation and remorse of one of the other guards, Mateo, who did not speak up in court against his fellow. Although Matteo feels the shame of the cruel attitude towards refugees and asylum seekers, his colleague has completely different thoughts about migration. When the guardian who hit Tatou to death talks about it, he blames migrants for running away from their problems at their homes. However, most of the time, the problems that migrants try to avoid are inevitable or not local but global issues. The migration itself is not a problem, but the policies handling it may cause problems both to the migrants and to the citizens of the host country. The unawareness of the guard of the truth behind migration, which may be forced or voluntary, is a common mistake per se. Moreover, migration is a fact of humankind since time immemorial. Sometimes due to political conflicts, other times due to environmental factors like drought, vast amounts of people had to leave their countries behind and start all over again as strangers at their new homes. What is new is not the concept of migration, but the borders that separate us. Before the notion of institutionalized sovereign states, when people did not need either any visa or residence permit to visit or to live in a certain country, terms of illegal or irregular migration had not been coined yet. There were neither checkpoints at borders to pass nor fences to cross. As the ownership of land became a matter of fact, so did the ownership of problems. Furthermore, most of the problems arisen in peripheral countries directly or indirectly originate from exploitative policies of core countries. For example, main contributors to global warming are industrialized and thus developed countries, yet the third world countries are most vulnerable to its effects. Hence, it would be outrageous to claim that climate change due to global warming is the problem of several countries and not of the others. Apart from that, labeling migrants as weak would be to underestimate the hardships they face on their way. Most of the time, it is harder to leave than to stay, and it must hold for migrants, as well.

Beyond any doubt, the most striking story in the movie was Adú’s story. Watching his journey and witnessing all the emotional and physical trauma he experiences along his way, also knowing that he is only a child, the audience of the movie cannot get away without showing empathy towards him and understanding the tough situation he went through. After ivory poachers broke into his house and attacked his mother, he was left with no choice but to run away with his sister. As two children with no visa and no money, the only way they could flee the country was to resort to smugglers. Just like in the movie, thousands of migrants try to pass borders at the cost of putting their lives in danger every year. The lack of documents or insufficient amounts of money are, most of the time, the main reasons why migrants or refugees do not employ conventional ways to enter the country they wish to go. Fatefully, many cannot see the end of the trip and lose their lives on the way. The tightening of migration policies and increasing selectiveness of receiving countries also contribute to the prevalence of human trafficking nowadays. The depiction of the fall of Adú’s sister’s frozen body off the plane may be a cinematographic exaggeration, yet it should not be forgotten that seas and oceans have become the graves of hundreds of refugees and migrants today. Adú luckily ends up at a juvenile detention center in Melilla but loses his loved ones on his way.

Another shocking story in the movie was undoubtedly Massar’s, which touches upon the sexual harassment of refugees, especially the women and children. Procuration of sex workers is all by itself a big issue, this underground economy is predictably one of the biggest industries in the world. Targets are the most vulnerable members of the society, so the exploitation of migrants is only to be expected. Besides, the victims of the sex trade must deal with not only the sexual abuse, but also the venereal diseases they are subject to. In the movie, we saw how desperate Massar was to earn money, as both him and Adú were starving and had not eaten anything for a while. Consequently, in order to make money, he caught a disease that possibly would kill him, but he refused to go to emergency owing to the fear of being deported. Like Massar, irregular migrants often evade going to the hospital even in most life-critical cases at the cost of their lives, though they can benefit from emergency services without any charge.

The movie ends with some statistics about migration, when its audience confronts with what s/he just watched was not only a movie, but the fact of life for nearly 70 million people, half of which are children. It is easy to watch drama when the story holds only for the movies. Nevertheless, showing the fact that millions face such inhuman conditions every day, the movie certainly raises awareness about the living conditions of refugees and asylum seekers.