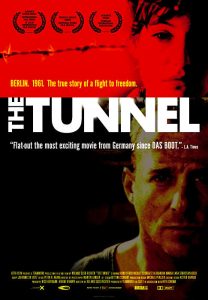 German movie “Der Tunnel” is a period drama that is mostly based on actual events that took place in Berlin after the border between East and West Germany was closed in August 1961 and the Berlin Wall was subsequently built. The movie was directed by Roland Suso Richter and released in 2001. The plot is about East Berlin residents escaping to West Berlin. The main character Harry Melchior (Heino Ferch) is an East German freestyle swimmer who recently won a national championship after serving a four-year prison sentence for his opposition to the Communist regime in East Germany. During the movie he is the focus of the story and events develop around Harry and his friends. Despite assurances from government authorities that elite sportsmen will be rewarded with comfortable accommodation and a respectable wage, Harry is hostile to the regime and plans to leave. Matthis Hiller (Sabastian Koch), a close friend of Harry who worries about the effects of East Berlin’s breakup with the West, escapes to West Germany with a group through the sewers but loses track of his wife in the chaos. Harry’s departure at Checkpoint Charlie is arranged by Matthis with the help of his dependable allies on the West German side using a disguise and a fake passport. However, Harry has to leave his sister Lotte (Alexandra Maria Lara) and her daughter Ina (Sarah Kubel). In order to save them and save the loved ones of his friends Harry and others came up with a plan. Harry’s friend Matthis is an engineer, so they use this as an advantage and plan to dig a 145 meters long tunnel underneath the newly constructed Berlin Wall.

After the defeat of Nazi Germany and the Axis Powers in World War II, Germany officially separated into two independent countries in 1949: the German Democratic Republic (GDR or East Germany), which was aligned with the Soviet Union, and the Federal Republic of Germany (FDR or West Germany), which was allied with the Western democracies. USA and USSR emerged as victorious and as superpowers from WWII but the ideological difference between them started a so-called “non-violent” war between them, the Cold War. The main objective of the Cold War -not the only one- was to prove to the world that one of the ideologies, Capitalism-USA or the Socialism-USSR, was better and must be the future of humankind. Therefore, both sides compete in lots of different areas from culture to technology.

Sporting events were inevitably one of the competition areas so as we can see in the movie East Germany made a great offer to Harry in an effort to keep him on their side and most importantly to avoid his escape -escaping athletes was a big deal in the Socialist regimes-. However, as indicated in the movie Harry is found to his freedom and he is a conceited person. We can see those treats of him at the beginning of the movie when he didn’t shake the hand of the officer. Despite those personal traits and probably Harry’s grudge movie doesn’t tell anything much about Harry’s and others’ motivation for escaping from the regime. This can be a downside for those who are looking for more socio-political insights about divided Germany and the effects of the Cold War. However, the movie does a great job of the human side of the division. Throughout the story, the audience can always see the distrust caused by the police state GDR and its informers. For the ones who want to escape or the ones who are only dissidents to the regime, there is always insecurity. Anyone can be an informer, even someone in your family.

The movie also shows how the division separated families and friends. Later in the movie, Harry and his friends need help to be able to finish the tunnel. They find lots of people who had to leave their families in the East and want to save them despite the danger. The border was not dividing two different countries but dividing the people with an ideological agenda. One of the best scenes that shows this was when one of the border guards shot someone who tried to jump over the wall to West Berlin. The scene highlighted the soldier’s unwillingness because nobody wants to kill someone just for wanting to go to the other side of a city. The movie dwells on that they were one people.