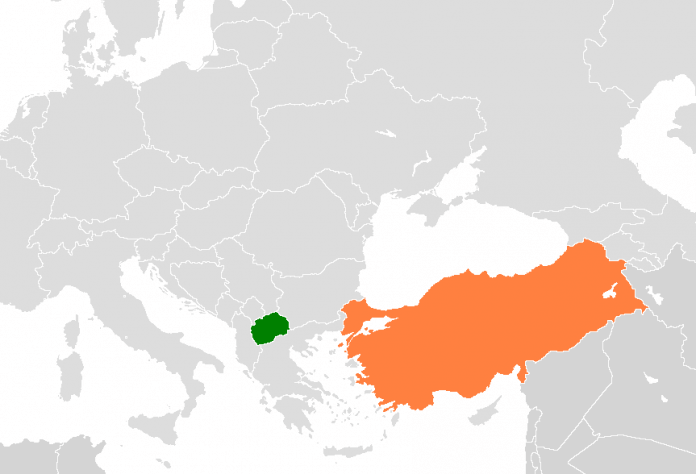 This interview was made with Mevluddin Ibish on North Mecedonia and Turkey relations.

Mevludin Ibish was born in Skopje. He completed his university education in Skopje Aziz Cyril and Methodius University, Faculty of Law, Department of Political Sciences. He also completed his master’s degree at the Faculty of Political Sciences at the University of Bologna, Italy. He completed his doctorate at Serbia’s Novi Pazar University Faculty of Law. Since 2010, he has been working as a lecturer at the International Balkan University. He also served as vice-rector at the same university in 2015-2016. Balkans and Turkey has been conducting research on the subject. It focuses on political history, political parties, civil society and political systems. Western Balkan countries and has written articles on political developments in Turkey towards European integration and political developments, the democratic process, political culture, political leadership and political responsibilities towards analysis was penned. He has also been a member of the scientific board of some scientific journals.

1. First of all, thank you for accepting my offer to interview you. Could you tell us a bit about yourself and your research?

It’s my great pleasure to be part of your research, and I hope you’ll succeed in your work. I was born in Skopje, North Macedonia and live with my family here. I have a PhD in political sciences and work as an Associate Professor at International Balkan University; furthermore, I have been a lecturer at Istanbul Sabahattin Zaim University-Turkey for five academic years, starting from 2015/16 until 2019/20. My main research field is Balkans and Turkey’s region related to soft power, political systems, political culture, and regional policies. I have conducted reports and written articles in this spectrum and joined TV debates related to Balkan politics and Turkey. I speak eight languages, and this helps me very much to conduct my research and to have a more realistic approach while I do study the Balkans and Turkey.

2. Your studies are usually on the Balkans and Turkey. What drives you to work in this field?

Balkan politics is a field of analyses that requires a systematic approach and deep knowledge about its historical background. The complexity of identities, the ethnic divisions and the political diversity motivated me to further this field. The Balkan Peninsula in itself incorporates a tremendous historical background. Its very much vivid construction having in mind the ideological penetrations that have been involved after the dissolution of the Ottoman Empire, more precisely with the start of the Balkan wars 1912 and the very beginning of the IWW-1914. Analyzing Turkey additionally towards the Balkans gave me an impetus and motivation to explore further the sui generis relationship that Turkey does have with the Balkans, having in mind its social capital constructed during the Ottoman period. It’s an economic and political relationship that has been driven during Yugoslavia and, more importantly, after the dissolution of Yugoslavia, once the Western Balkan reached their independencies.

3. There has been a long-term Name problem between North Macedonia and Greece. How much has this problem affected North Macedonia’s accession process to the European Union?

Of course, the name issue is very well known in the field of bilateral disputes, and these two neighbours (North Macedonia and Greece) are a substantial case study in the field of political sciences. The conflict started once  Macedonia got its independence, as it left the federation of Yugoslavia. At that moment, Greece began to bilaterally dispute Macedonia’s label by advocating that there’s another Macedonia label for its northern region in Greece. Furthermore, Greece lobbied so much in the UN at the very beginning to stop the entrance of Macedonia, which means it obstacle the acceptance of Macedonia’s statehood. They thus achieved this fact by pushing Macedonia to accept a very illogical name as Former Yugoslav Republic of Macedonia (FYROM) and with an acceptance that they will further negotiate towards finding a permanent solution in the future. In this regard, I think that Greece, with the name issue, created a significant problem for Macedonia to achieve its integration. Not only that but Greece also systematically disputed even the integration towards NATO. Until 2018, the Prespa Agreement was reached between the two neighbours, and Macedonia changed its name to North Macedonia. The NATO entrance issue was achieved, and North Macedonia is a member state starting from 2020. At this point, Greece changed its narrative and tried to help North Macedonia towards EU integration. Furthermore, Greece sees North Macedonia as a bilateral friend that is profoundly needed to start the negotiations with the EU. Of course, these changes came after the Prespa Agreement was achieved.

4. How has North Macedonia’s EU accession process affected or will affect the country’s foreign capital attractiveness?

We can state that being part of the EU does have a significant impact on the state economy. Still, I would say that being a NATO member somehow created a powerful platform for the FDI’s (Foreign Direct Investors) to be freer to invest, knowing that North Macedonia is a secure place once it entered NATO. This substitute is not for long. Therefore, North Macedonia needs to deepen its negotiation processes, mainly because it didn’t yet since Bulgaria blocks it. Otherwise, it will lose another period for finding and attracting FDI’s. Still, it will lose the opportunity to get more knowledge and educational capacities to compete with the EU market. You know that the negotiations process means support for North Macedonia’s institutions and economic capabilities to prepare for the whole-fledged entrance. As such, the economy should be prepared for competition and attraction of FDIs At this point, to make a summary, North Macedonia is lacking FDIs not only for not starting the negotiations with the EU, it also has to do with the high level of corruption, state establishment, the political culture and the shortages in the educational capacities.

5. Can we say that North Macedonia’s legacy of socialism creates a political challenge for the country? Why? How?

We know, and we have to admit, that North Macedonia was part of the Yugoslavian political construction, and it was an integrated entity within. Hence, as an ideological frame, socialism created its values and impacted its citizens and society.  Thus, socialism’s legacy can still be visible in how the public administration functions and how the political parties behave once they win the elections. In this perspective, I always state that political parties are obliged to bring policies; instead, they employ people. As such, I think that there’s a legacy from socialism, knowing that the state was the employer, so parties continue to play that role.

Furthermore, I can see corruption and nepotism as a kind form of continuation from ex Yugoslavia’s socialist legacy. Political accountability as well can be targeted, and the institutional responsibility is duly related to your question. So, I would say, from a global scale, North Macedonia moved towards the democratic provisions, but the insight deteriorated because of these legacies and continues to struggle with these issues.

I continue to push for this standpoint, and I bring lots of arguments for this, starting from the need that the Balkans and, in particular, North Macedonia does have from Turkey concerning:

And this suits Turkey because the Balkans is a region in which Turkey does have an influence having in mind its social and cultural relations seen via the door of history and economic, military and political support, and this gives a position to Turkey to be seen as a natural player in the Balkans. Turkey benefits from having its role in the Balkans because its involvement can be seen as a regional force and factor.

The relationship of North Macedonia with turkey is in perfect shape, and it was historically like that. After its independence, North Macedonia followed a very positive approach towards Turkey and vice versa. In addition to this, I would say that Turkey followed a more positive path towards North Macedonia, having in mind that Turkey is the first country that recognized by its name Macedonia and never disputed that name, by that created a very positive and natural relationship. This can be seen as an opposite approach from what Greece had until 2018, and in that format, it strengthened its position of Turkey’s involvement in North Macedonia. But Turkey has a challenging situation in North Macedonia, keeping in mind that we are a heterogonous society and all ethnicities have different interests and balancing it. It’s pretty complex. Turkey created good platforms and space for all sides, and by doing so, Turkey does have good support by all political end ethnic compartments. If you ask me as an Albanian who lives in North Macedonia, Albanians and Turks’ coexistence in North Macedonia representing the Muslim community was always in an excellent perspective—doing so created social capital that makes these assets more and more visible about both countries. With this, even Macedonians who are Christians have a favourable opinion of Turkey, which shows a good path for the Turkish factor and its involvement.

8. Turkey is one of North Macedonia’s critical commercial partners. With the agreement on trade and Economic Cooperation in 1994, how is the process going today?

That’s true, Turkey does have an excellent trade relationship with North Macedonia, and in that regard, if you see the statistics, Turkey does handle very well in terms of export of goods and services in agriculture, textile industry, steel industry and other formats, as well as tourism and health tourism which is being very much advanced lately I think. Even though Turkey is the winner in these comparative analyses, it still ensured that quality in goods and services is why the consumers in North Macedonia are attracted to Turkish products, which made a strong bond. I would say that Turkey fulfilled the gap once the Balkan states exited communism and, while transformed their economies needed products and services, and as such, Turkey implied itself in the Balkans markets. Furthermore, being near the Balkans from a geographical point of view gave Turkey an additional economic boost and the possibility for interaction and complex interdependency.

9. The Balkans have always been an essential region in Turkish foreign policy. What do you think about Turkey-North Macedonia Foreign Policy relations recently?

The foreign policy relations between North Macedonia and Turkey, as previously stated, we can easily say that its visible a tremendous bilateral relationship that resulted in a significant political, military, economic and social interdependency. Turkey supported North Macedonia systematically at all levels and is being historically recognized. Moreover, I think that terms as a “brother country” or a “close friend” are being referred to and used in the foreign policy vocabulary once visits are being formalized amongst both countries. Turkey continues to support North Macedonia at all levels. Sometimes I say in my analyses that all political factors never achieved the maximum of what Turkey can deliver as support towards North Macedonian society in terms of investments, social capital, access to knowledge, military aid, etc.

10. Finally, is there anything you want to add or say about the North Macedonia-Turkey relationship?

I would like to say that Turkey’s position after the Prespa Agreement 2018 between North Macedonia and Greece somehow changed Turkey’s old part as a regional factor. Greece fulfils the space in support towards North Macedonia in terms of security and EU approach. Of course, Turkey has a tremendous social and cultural relationship that Greece does not, but I would change some Turkish state’s methodologies in recent years via its soft power assets. This can be a discussion for other opportunities.