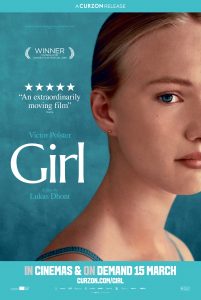 “Girl” is the feature-length debut film by Belgian director Lukas Dhont, which was also the debut work for its starring actor, Victor Polster. Dhont explains that the film was highly aspired by a real-life transgender ballerina he befriended years ago. He also mentions in an interview with Matt Fagerholm that he had immense help from her during the making of the film (Fagerholm, 2019).

“Girl” has been a controversial film since the beginning, mainly due to its star being a cisgender man, despite playing the role of a transgender woman. The casting of cisgender people for transgender roles has been a long-discussed issue in Hollywood, however, Dhont opposes this sentiment by claiming that the film industry is different in Europe, and that “as a filmmaker, if you handle a subject—in this case, a trans character—with respect, love and the utmost care, then I feel you can portray anything” (Fagerholm, 2019).

Perhaps the most important keyword that could be used in order to sum up this entire film is “body dysmorphia.” Body dysmorphic disorder is defined as “a mental health disorder in which you can’t stop thinking about one or more perceived defects or flaws in your appearance” (Mayo Clinic, 2019). And since Lara is a girl that was born in the body of a boy, every piece of her body that she deems as “male,” such as having a penis or a flat chest, she sees as “defects or flaws.” Lara’s body dysmorphia is triggered several times during the film, and each time the pain and confusion can be seen through her eyes.

Her body dysmorphia leads to her harming her body to grievous levels; however, she cannot seem to stop since this mental illness only seems to get worse and worse as the movie progresses. The fact that she faces transphobia from time to time (such as people deliberately using wrong pronouns or getting discriminated against when she is with other girls) does not help with the progression of her body dysmorphia either.

One significant aspect of Lara’s journey is her family. The film does a great job at conveying her father as a supporting parental figure. However, even with her father supporting her throughout her journey, she still struggles with her transition. Still, we can say that the fact that she has a supportive family is a privilege on her part since many transsexual people get disowned by their families when they decide that they want to live authentically. Even though she struggles to communicate with her father (as many teenagers her age can relate, so this is not an issue unique to her transsexuality per se), she still appreciates him for his support. The inclusion of her family also shows us that her journey is not only hard on her but also on her family.

Last but not least, Dhont also uses the “ballet” instrument order to show the audience Lara’s struggles with her identity. Ballet, being Lara’s dream, also leads to her pain. She insistently tries to hide her pre-op genitalia through unhealthy methods, which damages her body. The fact that she has to wear tight clothing while dancing intensively further contributes to her body dysmorphia. Lara not even once shies away from damaging her body in order to avoid even the tiniest trace of “masculinity” during her rehearsals.

Overall, “Girl” does a great job of delivering its intended message. As Dhont also points out in his previously mentioned interview, there is a reason this film was called “Girl” and not “Trans Girl” (Fagerholm, 2019). This motion picture depicts the story of a “girl,” who happens to be transgender. Her transgender identity leads to societal pressure, trauma, body dysmorphia, self-harm, issues with her relationships and a lot more, however, it still does not define Lara as a whole since, at the end of the day, she just wants the world to see her as just a “girl.” This motion picture is full of raw scenes depicting Lara at her most vulnerable, helping cisgender people peak into the world of a transitioning person and their struggles in its authentic form.